Agent Of Peace: Emily Hobhouse and her Courageous Attempt to End the First World War 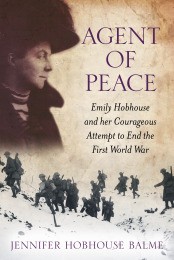 A slow-paced book that reflects the political atmosphere of the time. Emily’s lengthy journal extracts, particularly her time in occupied Belgium and in Germany, are the main highlight, bringing to life this incredible, modest woman in her own words.

The second of three books on Emily Hobhouse, Agent of Peace describes Emily’s heroic attempts to bring an early end to World War One. Written by her grand-niece, Jennifer Hobhouse Balme, the book is constructed from letters, journals and diaries.

Emily Hobhouse is, without a doubt, one of the most awe-inspiring – and even a little bit intimidating – women of the twentieth century. When war broke out in 1914, Emily was fifty-four years old and already a seasoned veteran in her own right. Having made quite a name for herself campaigning for women and children’s rights in the Anglo-Boer War (1899-1902), Emily now turned her attention to encouraging peace talks between Britain and Germany. Most remarkably, she organised a visit to occupied Belgium and even Berlin in 1916, in order to observe the conditions there.

This is where the story comes alive; while Emily was forbidden from talking to any inhabitants in the towns she visited, she described everything from their rations to their churches, their temperament to the sadness in the eyes of German soldiers, all with a poignant balance of pathos and realism. She writes “one of the clearest memories that will live with me of my whole tour is the ‘eyes’ of the German soldiery… really charged with deep, mingled, wonderful expressions. Eyes of all colours, blue, grey, brown, yellowish brown, black, hazel all made to look straight at you and all charged with feeling I find it hard to depict in words… These constantly recurring glimpses into the innermost souls of scores of men moved me to tears and haunt and will haunt me for years.” The fact that such an honest, human description of the ‘enemy’ army could be written so passionately by a contemporary of the conflict makes this journal, and its author, all the more powerful.

Jennifer Hobhouse Balme’s book is made up of editorial commentary, Emily’s journal, her brief diary and letter exchanges between key players. This makes for an interesting and varied read, somewhat at odds with the pace and events that unfold. For while Emily achieved much, in spite of her position both as an unmarried woman and as an invalid, her victories are hard-won, precisely because of her position as an unmarried woman and an invalid. Some may find this makes the book more challenging to read, as it can struggle to maintain your interest in the more prolonged periods of political back and forth. Others however might -– and perhaps should – see this as indicative of the struggles Emily herself faced. It’s frustrating to read about the continued obstacles Emily endured during her attempt to return to England after her trip, for example, but just imagine what it must have been like for the poor woman herself!

Ultimately this book represents an important contribution to the study of both the First World War and also gender history. Emily is a woman fighting for peace in a man’s war, but she is doing it on her own terms, drawing on her own strengths – her compassion, her tact, her patience and her intellect. As the debate about feminism and femininity rages on, perhaps we need role models like Emily to remind us that women don’t have to be ‘manly’ in order to be powerful.

You can buy the book here.