I have long been a fan of Queen Victoria. I own a copy of her diaries, I’ve read her biographies and have watched The Young Victoria more times than I care to admit. Her relationship with her husband, Albert, who she outlived by forty years, is both heart-warming and heart-breaking, romanticised by Victoria after his death and, subsequently, historians and writers after hers. While on holiday, I read Daisy Goodwin’s historical fiction novel, Victoria, which follows the queen through the early years of her reign (and is the counterpart to the TV documentary of the same name, starring Jenna Coleman and Rufus Sewell). 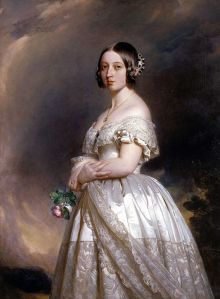 However, this book doesn’t really devote much time at all to Victoria and Albert’s love – we don’t even meet Albert until the ‘final act’ – and while Goodwin’s writing makes the chemistry between the pair almost tangible, she’s more concerned with the relationship between Victoria and Melbourne, the Prime Minister – and the idea that the pair became infatuated with each other.

I watched the first episode of the TV series last year and found this idea rather jarring – it contradicted my firm belief that Victoria only ever loved one man, Albert. I think also the feminist in me felt (and still feels, to a point) that it undermines Victoria to have her effectively falling in love with the first powerful man she meets, despite him being old enough to be her father. Indeed, there are a number of ways in which Goodwin has taken creative licence with Victoria’s life and relationships – stating that Victoria and Albert disliked each other when they first met (when her diary suggests otherwise), that her Uncle Leopold was an unwanted presence in her life (actually she called him her “best and kindest adviser”) and even going as far as to imagine that Victoria proposed to her “Lord M” in his garden (for which there is no evidence). While the pair were certainly close, it is most likely that Victoria loved him like a father – having never met her own – and that Melbourne’s feelings for the young Queen were in a similar vein. 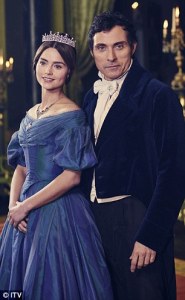 Coleman and Sewell as Victoria and Melbourne in the TV series

However, perhaps it’s not entirely far-fetched to believe that a passionate and creative young woman like Victoria, basically placed under house arrest by her mother and Sir John Conroy until she inherited the throne at the age of eighteen, met Melbourne at a time when she had a lot of love to give, but no-one beyond her lapdog, Dash, to give it to.

Indeed, if you want proof of Victoria’s great capacity for emotion and affection, here’s her diary entry after she married Albert in 1840:

“I NEVER, NEVER spent such an evening!!! MY DEAREST DEAREST DEAR Albert … his excessive love & affection gave me feelings of heavenly love & happiness I never could have hoped to have felt before! He clasped me in his arms, & we kissed each other again & again! His beauty, his sweetness & gentleness – really how can I ever be thankful enough to have such a Husband! … to be called by names of tenderness, I have never yet heard used to me before – was bliss beyond belief! Oh! This was the happiest day of my life!“

Perhaps this great well of emotion could also explain the ‘unlikely’ relationships she developed with male friends after Albert’s death. I continue to believe – and it seems Goodwin does too – that what Victoria and Albert shared was true love, but his premature death essentially put Victoria in a similar position to that of her 20 year old self: capable of great passion and devotion, but with no-one to bestow it upon. And while she did commit herself to loving and honouring Albert’s memory (wearing black for the rest of her life, renaming the ‘Central Hall’ as the Royal Albert Hall of Arts and Sciences) perhaps one can only devote themselves to a ghost for so long, no matter how much he is loved.

Victoria, Albert and their children

If you want to read Daisy Goodwin’s Victoria (and it is worth a read, in my opinion), you can find it here.

One thought on “Did Queen Victoria Really Fall In Love With Her Prime Minister?”