The question of female identity inevitably encouraged both film-makers and audiences to explore ideas of masculinity, in particular the relationship between heroism and men in non-combatant roles. If men had to fight to prove their masculinity, what did that mean for those unsuitable, unwilling or unable to go into battle? Fire Were Started and Went the Day Well? both offer examples of the ordinary hero – a man who proudly and bravely did his duty for his country; whatever that duty might be.

In Jennings’ film, Jacko falls to his death as the warehouse wall collapses; having remained on the roof to allow his comrades to escape first. Jacko’s valiant sacrifice is honoured by the funeral sequence at the end, but it is not exaggerated, suggesting Jennings’ understanding of the anti-heroic sentiment generated in the inter-war years, when people began to grow uncomfortable with depictions of grand acts of heroism. The film also emphasises the understated nature of British courage and resilience during the Blitz, suggesting that any of the firemen would have acted the same way.

Likewise Went the Day Well? shows men – and women – risking their lives for the sake of their village and their children; symbolic of Britain and future generations. The elderly vicar dies attempting to defy the German invaders, telling them bravely that he ‘will take no orders from those who are the enemies and oppressors of mankind!’ The rest of the men, following his lead, offer themselves up in the place of their children when the German soldiers threaten to kill them. Thus the unassuming heroism and dutiful nature of non-combatant men is explored in these topical war films: these examples of brotherly and paternal sacrifice are not unlike those of the soldiers dying overseas for the freedom of future generations.

Furthermore, the twentieth century had seen a move away from the Victorian ideal of detached, undemonstrative masculinity, seeing men become more homely – especially after the First World War. Therefore men who were doing their part in the war effort, particularly those in traditionally masculine roles, were allowed to be sentimental. In fact, given the ultra-masculinity of the Nazis, sensitivity among British males was encouraged. In A Canterbury Tale British Sergeant Peter Gibbs shows his sentimentality through his passion for organ music: the blessing he receives in Canterbury is to play Bach on the organ at Canterbury Cathedral. What is more, his decision not to report Colpeper to the police as the ‘glue-man’ of Chillingbourne proves his rationality; a traditionally masculine virtue and one that the ruthless Germans in films such as Went the Day Well? are shown not to possess. Indeed, in this film the middle-aged Mrs Collins is appalled by the brutish behaviour of one of the ‘British’ soldiers, telling him ‘you’re a disgrace to your uniform’ and ‘no better than a German’. Thus, while it was largely exempt from the exploration of female identity, the subject of war was crucial to the construction of British masculinity as it offered a barbaric, hyper-masculine ‘Other’ against which such manhood could be measured.

But what of those who did not fit this model of sentimental, unassuming heroism? In 1944, the height of wartime mobilisation, there were 10.3 million men in civilian employment, as opposed to 4.5 million servicemen[1], therefore the war shattered any illusion of homogeneous masculinity existing within Britain. While the topical films offered a complementary exploration of the dutiful, brave men working in the Home Front, with the exception of Fires Were Started, this Front remains very much a female zone – symbolically at least. As described previously, ‘home’ and ‘woman’ were traditionally synonymous: the invasion by the German soldiers in Went the Day Well? could be seen metaphorically as rape, from which only the British soldiers can save them. The men of Bramley End are undeniably brave, but they are somewhat helpless in the face of the Germans; it is the women who first suspect that the soldiers are German and likewise the women who make a variety of ingenious attempts to get help. Thus the film provides the audience with examples of both the hero-soldier and the hero-civilian, although ultimately suggesting the masculine superiority of the former through the narrative structure. 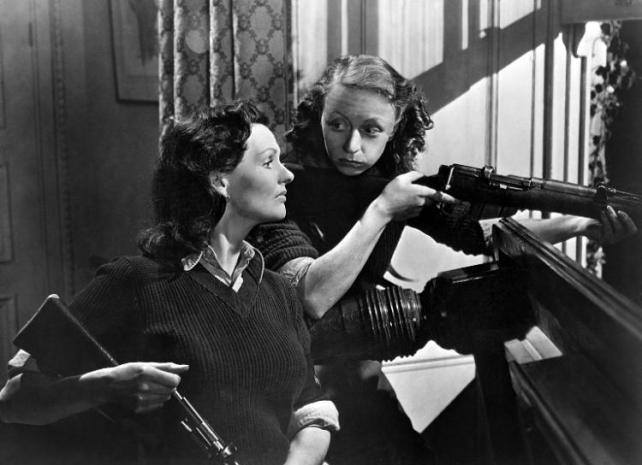 The same can be said for A Canterbury Tale: two of the three main characters who uncover the identity of the glue-man are soldiers. While language and military uniform are used to highlight the national differences between the American and British sergeants, ultimately both are shown to have similar masculine qualities: they are dutiful, respectful to Alison and sentimental – suggesting that in the context of war gender parallels between allied nations were highlighted as emphatically as gender differences between enemies.