My great grandpa, Norman George Dale, was born on 7th March 1896 to Frederick Dale, a farmer, and his wife Martha. He was one of ten children, three sisters and seven brothers and the family lived happily at Oxheys Farm in Cheshire.

When the war broke out in 1914, two brothers, Harry and Fred, stayed at home to maintain the family farm; even when conscription was introduced in 1916 they was exempt from service as a result of their occupation.

The remaining brothers Sidney, Walter (32), Albert (23), Frank (21) and Norman (18) all fought in the war. While Norman was technically too young to serve overseas – the minimum age for this being nineteen – he lied about his age so he could fight beside Frank, as the two youngest brothers were inseparable.  Walter, Albert, Frank and Norman all joined the Manchester Regiment; Albert in the 22nd Battalion, Walter in the 2nd/5th and Frank and Norman in the 2nd/6th. 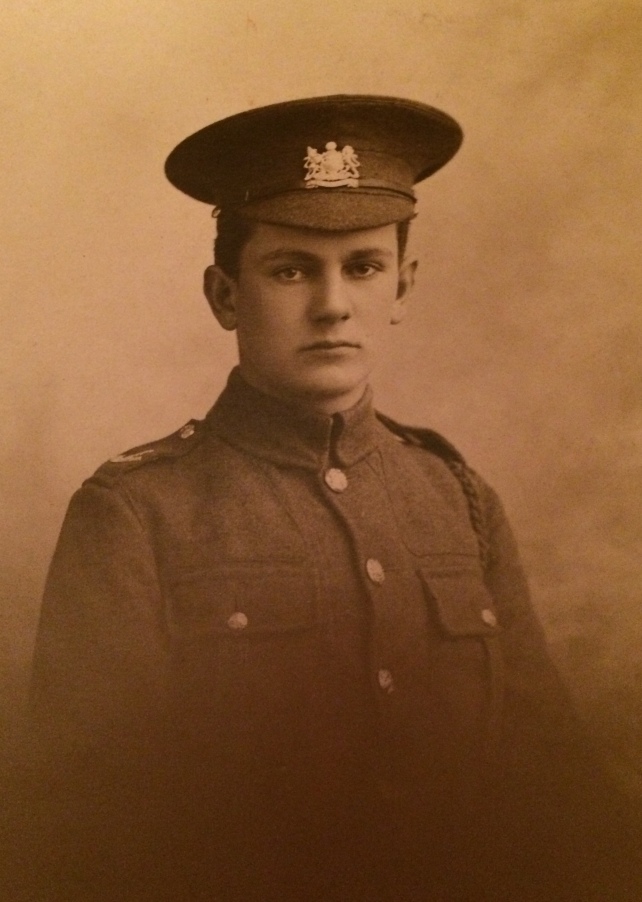 The 2nd/6th battalion was formed at Wigan in August 1914 as a second line unit. In November 1914 it was placed under command of 199th Brigade in 66th (2nd East Lancashire) Division. After training, the battalion was sent to the Western Front in February 1917 and fought in and around Ypres.

In a tragic turn of events not unlike the plot of ‘Saving Private Ryan’, only one of the brothers came back: my great grandpa. Albert, Walter and Frank were all killed in the same year, 1917, with Walter and Frank’s deaths occurring just eight days apart. Albert was killed in January, then Walter on 22nd July and Frank on 30th. Norman was actually in the same trench as Frank at the time and saw his beloved brother die before his very eyes, when he was hit by a shell. It is almost impossible to imagine what it was like for Frederick and Martha, to have the dreaded telegraph delivered three times in one year – and twice in just over a week, each time regrettably informing them that another of their sons had lost his life in active service.

Shortly after Frank’s death, Norman was gassed and invalided out of the war. His experiences left him very introverted and reluctant to talk about what happened. In addition to the loss of three brothers and sons, two of the family’s daughters – Elsie and Nancy – also lost their fiancés in the war. Neither ever married.

It might seem that there is little to gain from sharing such a sad story, but the more I think about it the more I see that it is as much a story about love as it is about loss. It is the story of a young boy risking his life and faking his age because he adored his older brother. It is the story of two young women whose love for their sweethearts lived on, even after they had passed away. Finally, it is about love bringing people back from the abyss…

A few years ago my mum asked my nanny to write her memoirs. As well as writing about her own life she also described her father, Norman Dale, and how it was her mother, Marie, who saved him: “To try to bring him out to start to ‘live’ again, his sisters persuaded him to join the local tennis club. There he met mother and his fate was sealed! She was the medicine he needed. She was vivacious and full of enthusiasm for life. She always said it was love at first sight.” It was love, then, that helped my great grandpa Norman find his way back to himself – it was love that allowed him to live and to laugh again, after losing so much in the war.

And so that is why, 96 years after the Armistice was declared, I choose to remember the power of love, rather than the pain of loss.