A powerful and illuminating book that shows not just how Mary Lindell fought for the Allies in the Second World War, but how countless other brave women risked their lives and their liberty as well.

Lindell’s List tells the story of Mary Lindell, a decorated World War One nurse, who was also one of the most resilient and courageous British agents in World War Two. Mary helped stranded allied soldiers escape occupied France, survived multiple near-fatal injuries, and eventually endured the horrors of the German-run Ravensbrück concentration camp. The title of the book refers to an event that occurred in the spring of 1945, when Mary managed to counter German claims that there were no British or American prisoners at Ravensbrück, by smuggling a list of their names out to the Swedish and Danish Red Cross. She did this in the nick of time; Mary and her fellow British and American prisoners escaped from Ravensbrück on the very last Red Cross bus.

In his introduction, Peter Hore writes that he wanted to give a true account of Mary Lindell’s service to her country in the Second World War – one that neither exaggerated her achievements nor downplayed them, as the limited existing accounts have been prone to do. Instead, he wanted to show her “warts and all”. Hore achieves this, and Mary comes across the better for it.

Indeed, this “warts and all” presentation only serves to make Mary seem even more impressive. Even when Hore strips back the exaggerations (made by both Mary herself and her biographers), it is still abundantly clear that Mary did incredible things during the course of World War Two. I won’t spoil the story by detailing her achievements, but I will tell you this: after spending 9 months in a German prison, Mary Lindell escaped to Britain, only to insist that she parachute back into France at the earliest opportunity. That was Mary Lindell for you; quintessentially British and a force to be reckoned with; if she wanted something done a certain way, it usually was. 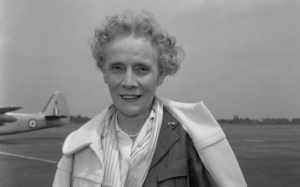 It is hard to reconcile Mary’s devotion to the cause with her seeming apathy towards her three children, though. Indeed, her attitude towards them ranges from disinterested to derisive. But maybe that explains why she was able to give herself so entirely to the resistance – it was her number one priority; her most important duty. Had she been more maternal, she arguably wouldn’t have been able to have risked her life time and time again. This brusque and detached attitude likely also helped to keep her – and countless other women – alive in the horrors of Ravensbrück concentration camp.

I should say at this point that Hore also allows his readers to get to know many of the other women on Lindell’s list – most of whom were British/American agents fighting against the Axis powers. Each was a heroine in her own right, and I’d say each deserves a book of her own.

Ultimately, Lindell’s List is informative but very easy to read (with short chapters that make it easy to stop and start when commuting in and out of work!) Further, Hore’s use of first hand accounts means that he is able to bring events to life vividly, writing in a way that is as detailed and gripping as fiction.

You can order a copy of Lindell’s List here.