The anxious discourse on female mobilisation during the war also concerned the perceived necessity of protecting the femininity of these women. Gender distinctions rest largely on appearance, thus “these trouser-clad androgynies destabilised the polarisation upon which gendered identity normally rested”[1]. When Kit meets Lissa in Love Story he is relieved that she is not ‘a strong, muscular girl’. This passing exchange can be used to shed light on underlying concerns that independent, working women would deter potential suitors. The MP Elizabeth Summerskill attempted to reassure the female public that men were falling in love with these confident, capable women, but the very need for such a promise suggests that successful women fulfilling masculine roles were sometimes seen as threatening by single men. 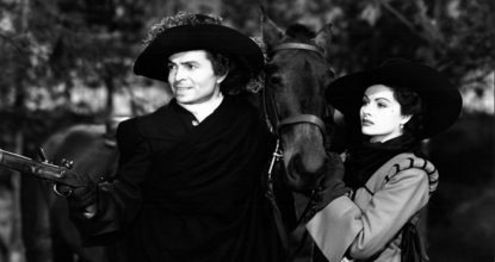 This issue is also alluded to in The Wicked Lady: bored with married life, Barbara takes to highway robbery, dressing as a man so as to protect her identity. The film takes fears of masculine women to its extreme, with Barbara symbolically becoming a man in order to enjoy a life of scandal and crime. When she consummates her affair with James Mason’s infamous highwayman, she does so “in a shoulder-padded, tailored blouse, redolent of maleness and of severe 1940s female fashion”[2]. By visually transgressing gender boundaries, Barbara loses the trappings of femininity and is free to indulge her sexual immorality. Women were therefore anxiously encouraged to accentuate and improve their femininity. On 16 March 1940, ‘Woman’s Own’ magazine published an article in which ‘six famous men’ gave their opinion on ‘the ideal woman’: variety actor Sonnie Hale wrote that women should join the war effort, but that they should not become manly in the process – they should ‘be truly feminine’[3].  Publications offered women lessons in domesticity and tips for improving their appearances and this emphasis on glamour implies that “being physically attractive and focusing on self-adornment were necessary preoccupations for women even in wartime”[4].

The success of the Gainsborough melodramas also suggests that women wished to escape from the austerity of war to a distant world of luxury and beauty: the films allowed an expression of female sexuality denied by wartime dress and duties. Despite the emphasis placed on women’s femininity and self-adornment, clothing rations had been introduced in 1941, forcing “a redefinition and restriction of the female wardrobe”[5]. The melodrama costumes, especially the ‘historical’ ones, were extravagant and luxurious; the low-cut, figure-hugging dresses of the sensuous female stars were adorned with lace and jewels. Their male counterparts, too, sported tight trousers and shirts unbuttoned to the waist, aligning them with romantic literary characters like Mr Darcy and Heathcliff. The melodramas were created to address a perceived box-office need; they targeted specifically female, working-class audiences and therefore actively responded to the concerns and desires of this class- and gender-specific group. Thus, just as Summerskill’s reassurance that capable women could find love implies that this was a genuine concern, the images of luxury used in these films suggest that working women missed looking feminine, if not actually behaving as such. 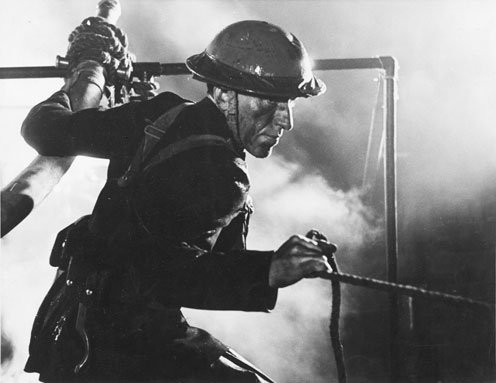 In contrast, the topical films do not address female dissatisfaction with austerity measures: in Fires Were Started (screenplay and dir. Humphrey Jennings, 1943) the men and women working in the auxiliary fire service’s 14-Y sub-station are primarily seen in buttoned, straight-fitting uniforms. Symbolically, this emphasizes professionalism over pleasure; duty over desire – a theme comparable with Brief Encounter, as Laura, too, wears simple, androgynous clothes which echo wartime utility fashions, despite being set in 1938. Indeed, Laura only wears luxurious, feminine clothes in a dream sequence on the train after Alec kisses her. She is picturing the two of them, Alec in a dinner suit and herself in a beautiful white dress, with white gloves and sparkling jewellery, in the amorous locations of Paris and Venice. Laura’s fantasy plays out on the train window much like a film sequence and thus subtly links female fantasies with female cinema-going. Therefore both Brief Encounter and the Gainsborough melodramas explore feminine desire through their interaction with the austerity of the period.

2 thoughts on “Did Films Reflect or Shape Gender Roles in the Second World War? Part 2”