This week, my boyfriend took me to see Les Miserables at the West End. Despite being a huge fan of the film adaptation and having sung all the songs in my high school choir, I had never been able to see the show on stage. It didn’t disappoint. But, before this turns into a review of the musical or – worse – a lengthy love letter to the musical that is Les Mis, I wanted to look into the history behind the story – and the tragic events that inspired the novel it’s based on.

Many people (myself included, originally) assume that Les Miserables is about the French Revolution of 1789-99. Les Miserables is actually set about thirty years after this Revolution, and concerns a rebellion that occurred in Paris in June 1832 against the rule of King Louis-Philippe. Two years earlier, another revolution (it was a tumultuous time) had put the popular ‘Citizen King’ Louis-Philippe on the throne. But popularity can only excuse so much, and the widening of the income gap, the deterioration of working class living conditions and a deadly cholera epidemic all served to exacerbate an already severe economic crisis. The result? An unhappy public and a less-popular ‘Citizen King.’

The June Rebellion began in the early hours of 5th June, when a crowd led by students and workers and numbering tens of thousands gathered in the streets of Paris. The death of General Lemarque (“his death is the sign we await!”) served as the call to action the rebels were waiting for  – Lemarque had been a friend to the poor and the wretched; surely the people would rise to the cause now their greatest ally was gone? 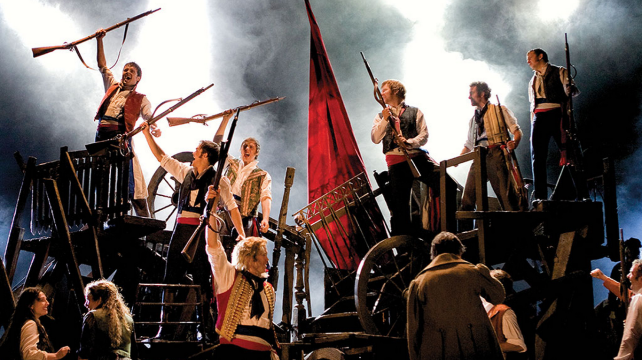 Victor Hugo was thirty years old at the time, writing a play in the nearby Tuileries Gardens. He heard gunfire from the direction of Les Halles and went to investigate, unaware that by this point the rebel mob had taken over half of Paris and were in the process of putting up barricades around the city. Soon becoming trapped between several barricades, with the battle raging around him, Hugo found shelter between some columns and waited while the bullets flew overhead. Three decades later, he brought this experience to life in the novel ‘Les Miserables’.

Unfortunately for the rebels, the citizens of Paris weren’t as keen to join the rebellion proper as they were to take part in the rowdy funeral march hours earlier. Lacking popular support, the June rebellion was crushed barely twenty-four hours later, leaving as many as 800 revolutionaries dead and wounded.

This was a very different revolution indeed, then, to the French Revolution of the eighteenth century. While there are many more unfortunate characters and tragic sub-plots within Les Mis, this failed rebellion and the dreadful waste of life it resulted in alone is worthy of Hugo’s emotive title  ‘The Miserables’.

2 thoughts on “Do You Hear The People Sing? The History Behind Les Miserables”