For a Titanic-obsessed, WW1-enthusiast, you can imagine how delighted I am to find myself currently working on a World War One battleship. Not that I am doing anything nautical in my job, I should add, but the digital agency I work for happens to have its office onboard the HMS President.

Naturally, I did a bit of investigating…

The HMS President was originally called the HMS Saxifrage; she is a Flower-class anti-submarine Q-ship completed in 1918, under the Emergency War Programme for the Royal Navy. Her successors evolved into the modern Frigate – the most popular front-line fighting ship in today’s Royal Navy. 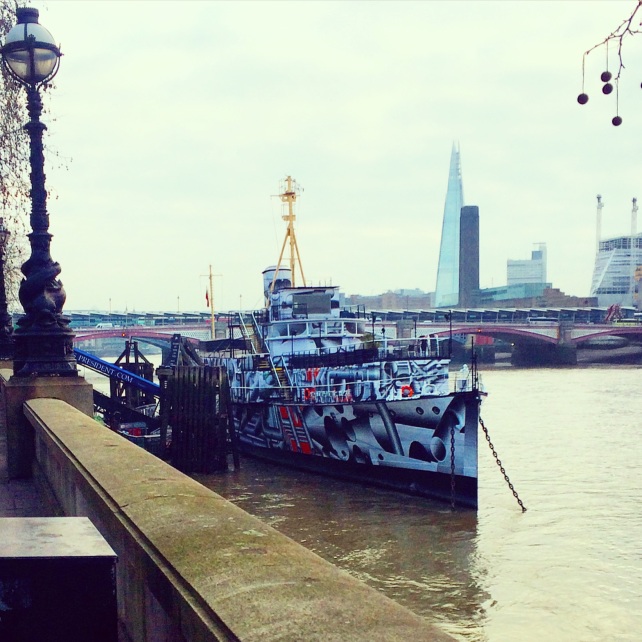 After the First Battle of the Atlantic in 1915, Britain was desperate to launch  a counter-attack against the German U-boats that were destroying her ships – merchant and otherwise.

Thus the Q-ship was born: one of the most closely guarded secrets of the First World War. The codename ‘Q-ship’ referred to their home port – Queenstown in Ireland. To the Germans, these vessels were known as U-Boot-Falle (‘U-boat trap’).

The deception was simple; built to look like merchant vessels, Q-ships would draw the U-boat up to the surface and then make a sudden, surprise attack on the unsuspecting submarine. The Flower-class ships were also camouflaged with a range of dazzling designs, so as to confuse the primitive range-finders of WW1 submarines.

Disguised as an unarmed merchant ship, the Q-ship would sail alone in an area the British knew was being patrolled by a German U-boat. If the plan worked, the U-boat captain would make a surface attack on the seemingly vulnerable ship, rather than wasting one of his limited torpedoes. Even if he did launch a torpedo, the Q-ship’s cargo was designed to remain afloat, further provoking the U-boat into a surface attack. Once the German submarine surfaced, the Q-ship’s panels would drop to reveal her deck guns and she would immediately open fire on the unsuspecting attacker. At the same time, the Royal Navy flag would be raised (the metaphorical raising of the British middle finger, if you ask me). Surprised and panicked, in theory the U-boat would then be quickly overwhelmed.

Sadly, it didn’t always happen like that and after the war it was decided that Q-ships were massively overrated, neither making the most of the Navy’s skill, nor sinking enough U-boats to justify the strategy. Indeed, out of 150 engagements, Q-ships only destroyed 14 U-boats and damaged 60 – rendering them responsible for a mere 10% of all the U-boats sunk in the war. The ordinary minefield, it appears, was much more effective.

I think it’s worth pointing out, though, that they did seem to have fairly decent survival rate: of the approximately 200 active Q-ships during the war, only 27 were lost (13.5%).

The HMS Saxifrage’s active service was brief; she was renamed the HMS President in 1922 and served as a Royal Navy Reserve drill ship. During the Second World War she was used as a training ship; training gunners for Defensively Equipped Merchant Ships. Finally, in 1988 she was sold privately and can now be found moored on the Thames. She is one of the last three surviving Royal Navy warships from the First World War – a relic of a lost age.